Welcome to THE MAKING OF A NATION – American history in VOA Special English. Ulysses Grant was elected president of the United States in eighteen sixty-eight. Grant was a military hero. He led Union troops of the North to victory over Confederate troops of the South in the Civil War. Grant was extremely popular. But he was a much better general than he was a politician. As president, it was not long before he got into trouble in the battles of politics and government. This week in our series, Larry West and Frank Oliver talk about the first term of President Ulysses Grant. Grant resigned from the army to run for president. However, he ran on his record as a winning general. "Let us have peace," he often said. And the people believed he would guarantee peace. In fact, Grant guaranteed nothing. As a presidential candidate, he offered no new national programs. So, as president, he had no new policies to carry out. He had few struggles with Congress, because he rarely asked Congress to do anything. Many events took place during Grant's two administrations. But he usually was not involved directly. He had problems only because he was linked indirectly to the men who were responsible.
One of President Grant's first problems was caused by two of his friends. They tried to take control of the gold market. The men were Jay Gould and James Fisk. Both were extremely rich. Gould and Fisk developed a plan to buy a large part of the nation's gold supply when the price was low. They would hold the gold until demand greatly increased the price. Then they would sell it and make a lot of money. To be successful, they had to prevent the government from selling gold on the market. Government sales of gold would keep the price down. So, Gould and Fisk urged President Grant to stop the Treasury Department from selling gold. Grant refused to give them a firm promise. The two men brought one of Grant's relatives into their plan. They paid him to write a letter to the president. It asked the president to halt government sales of gold. A messenger took the letter to the White House. He then sent a telegram to James Fisk saying the letter had been delivered. The telegram said: "Letter delivered, all right." Fisk thought this meant that President Grant had agreed to halt government sales of gold. So he began buying gold in huge amounts. Fisk was wrong. The words "all right" meant only that the letter had been delivered. They did not mean that Grant had agreed to the plan. In fact, Grant did not agree. He ordered the Treasury Department to sell gold to block the attempt by Gould and Fisk to control the gold market.
The result was that James Fisk and Jay Gould lost a great amount of money. So did other businessmen and bankers. Many Americans blamed President Grant for not acting quickly enough to stop the activity of his two friends. Concern about Grant grew after another incident was reported at the New York customs office. Two of Grant's friends there became involved in a plan to get money from importers. They used their official positions to earn huge amounts of money. Grant also was criticized for one of his few independent actions as president. He tried to buy the Dominican Republic in the Caribbean. The island nation was ruled by a dictator, Buenaventura Baez. Baez was so dishonest that the people of the Dominican Republic were ready to overthrow him. Before this could happen, he offered to sell his country to the United States. When Grant received the offer, he sent a White House official to negotiate with Baez. The official returned with a treaty giving the Dominican Republic to the United States for one-and-one-half-million dollars. Grant immediately sent American warships to the Dominican Republic. He wanted to keep Baez in power until the treaty was completed. 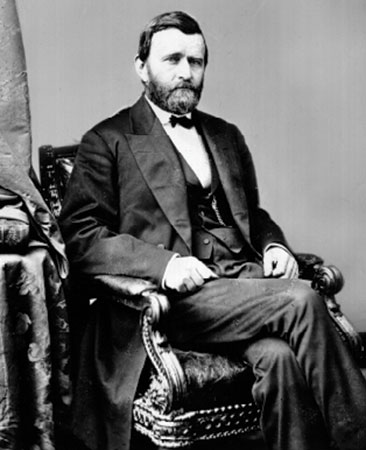 Grant asked the Senate to approve the treaty. Many senators opposed it. They said taking control of the Dominican Republic would cost too much money. They also said it was a bad idea for the United States to take control of any nation in the Caribbean. President Grant went to the Capitol building himself to urge senators to approve the treaty. His efforts failed. The treaty was defeated. Grant's biggest national problem was the political situation in the former rebel states of the South. After the Civil War, most southern states were governed by radical members of the Republican Party. Radicals supported citizenship rights and voting rights for blacks. In the late eighteen sixties, the radicals began to lose power. Many failed to be re-elected to state office. They were being defeated by candidates of the Democratic Party. Democrats did not want blacks to have any rights at all. The first radical Republicans to lose power were those in Virginia. The change there was made peacefully. Not so in other southern states. In Tennessee, Georgia, and North Carolina, Democrats used threats and violence to win elections. Their campaigns often were led by members of the Ku Klux Klan.
The Klan was a secret organization of white men. Members believed white people were greater than black people. Wearing cloths over their faces, Klansmen broke up radical Republican political meetings. They threatened, beat, and killed blacks to keep them out of politics. They did the same thing to whites who tried to organize or help blacks. Before long, Ku Klux Klan groups were formed in every southern state. By eighteen seventy-one, radical Republican congressmen were demanding a new law to destroy the Ku Klux Klan. A committee headed by radicals was named to investigate Klan activities in the south. The committee heard reports of the Klan's brutal acts. It helped prepare a bill to control the Klan. After much debate, Congress passed the bill. The new law gave the president power to declare military rule in the south. Democrats charged that the real purpose of the law was to keep radical Republican state governments in power. President Grant did not wait long to use his powers under the new law. He declared military rule in a large area of South Carolina. Thousands of people there were arrested. They were tried in federal courts. Juries were made up mainly of blacks and radical whites.
This kind of justice made southerners feel even more bitterness toward the North. It also angered a number of moderate members of the Republican Party. They said the federal government should not help radical Republicans stay in power in the south. Some of these moderate Republicans broke away from President Grant and the radicals. They called themselves Liberal Republicans and formed a new political party. They held their own presidential nominating convention for the election of eighteen seventy-two. They nominated Horace Greeley as their candidate. Greeley published the New York Tribune newspaper. Democrats believed their only chance to win the election was to support the new Liberal Republicans. So they, too, chose Horace Greeley as their presidential candidate. As expected, the radicals who controlled the main Republican Party nominated Grant for a second term. The campaign between Grant and Greeley was very strange. Grant made no speeches. He spent the summer at a holiday town on the Atlantic Ocean coast. His supporters, however, were not silent. They called Greeley a fool and a traitor. They refused to treat him as a serious candidate. Unlike Grant, Greeley did campaign hard. But he had little financial help. He also was hurt by a poorly-organized campaign. On election day in eighteen seventy-two, Ulysses Grant won a big victory. He got the votes of thirty-one of the thirty-seven states. Horace Greeley died three weeks after the election. The new Liberal Republican Party died with him. Ulysses Grant and the radical Republicans would govern for another four years.